On Friday, 25 November 2016, well over a hundred people met at the Williamson Street Community Centre in Holloway to begin discussing how a community vision for the former prison site might be developed. 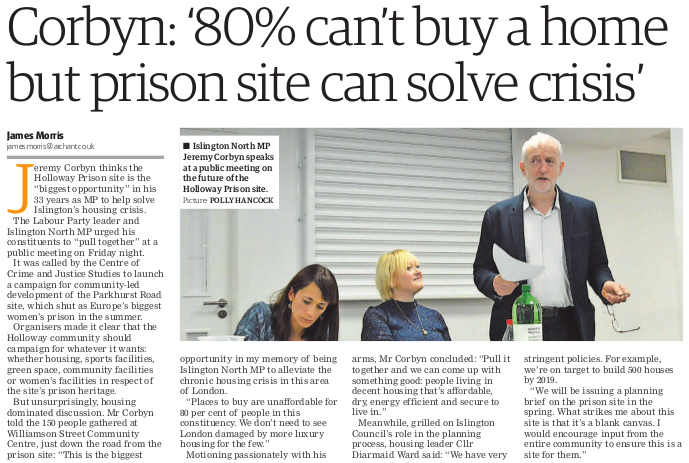 The meeting, organised by the Community Plan for Holloway, heard opening speeches from local MP, Jeremy Corbyn, the Mayor of Islington and local councillor, Kat Fletcher, Kate Paradine, Chief Executive of Women in Prison and Eileen Short a long-standing campaigner on housing issues.

Local residents discussed how the land on the former prison site might be redeveloped in the community interest.

This community meeting was the first of a number we plan to hold over the next few years to work with residents to develop a community vision for the Holloway site.

Such a vision is essential if the land is not simply to be sold off to developers for expensive, private housing. What has been a public asset will become private property. We do not think this is inevitable.

You can read Richard’s introductory remarks to the meeting and a comment piece by deputy Director Will McMahon on the key themes that emerged during the discussion.